Most dog owners are used to the sight of their dog gnawing on a bone for what seems like hours without a pause. Why do dogs love bones so much, however?

At first, the answer can seem obvious – they are carnivores after all, why wouldn’t they like the chew bones? On the other hand, other carnivore pets humans tend to have such as cats don’t really share dogs’ affinity for bones. Cats might chew on the occasional bone for a bit if they get the chance but not as much as dogs.

Why is that? Here are the 4 main reasons:

Even people know how delicious bones are – we boil them to make broth as we don’t have the strong teeth and jaws of dogs. But we love said broth nevertheless. With their large jaws and powerful teeth, however, dogs are perfectly capable of eating bones in a way neither cats nor humans can. And, so, the answer to “Why do dogs like bones so much?” can simply be summed up as – “Because they can.”

Because we don’t eat bones, we’re used to thinking of them as “a waste”, as if all the nutritious value is contained in the meat alone. That’s not actually the case, however. Bones contain bone marrow which is very rich in fat and calcium. Add the protein-rich meat chunks that are often left on bones, and chewing them can actually be quite a decent meal.

Another reason why dogs love bones more than cats is that dogs are much more playful than their feline counterparts. While a cat prefers to just eat its meal, take a bath, and then go for a nap, a dog would much rather play with its food for as long as possible. As more intelligent animals, dogs are very prone to boredom and always look for new toys to play with. From that point of view, bones are just like sticks in the park – a whole new toy to have fun with.

Have you ever had to brush your dog’s teeth? Not exactly the most fun part of being a dog owner. And yet, many dogs need dental care because they are prone to lots of tooth problems. 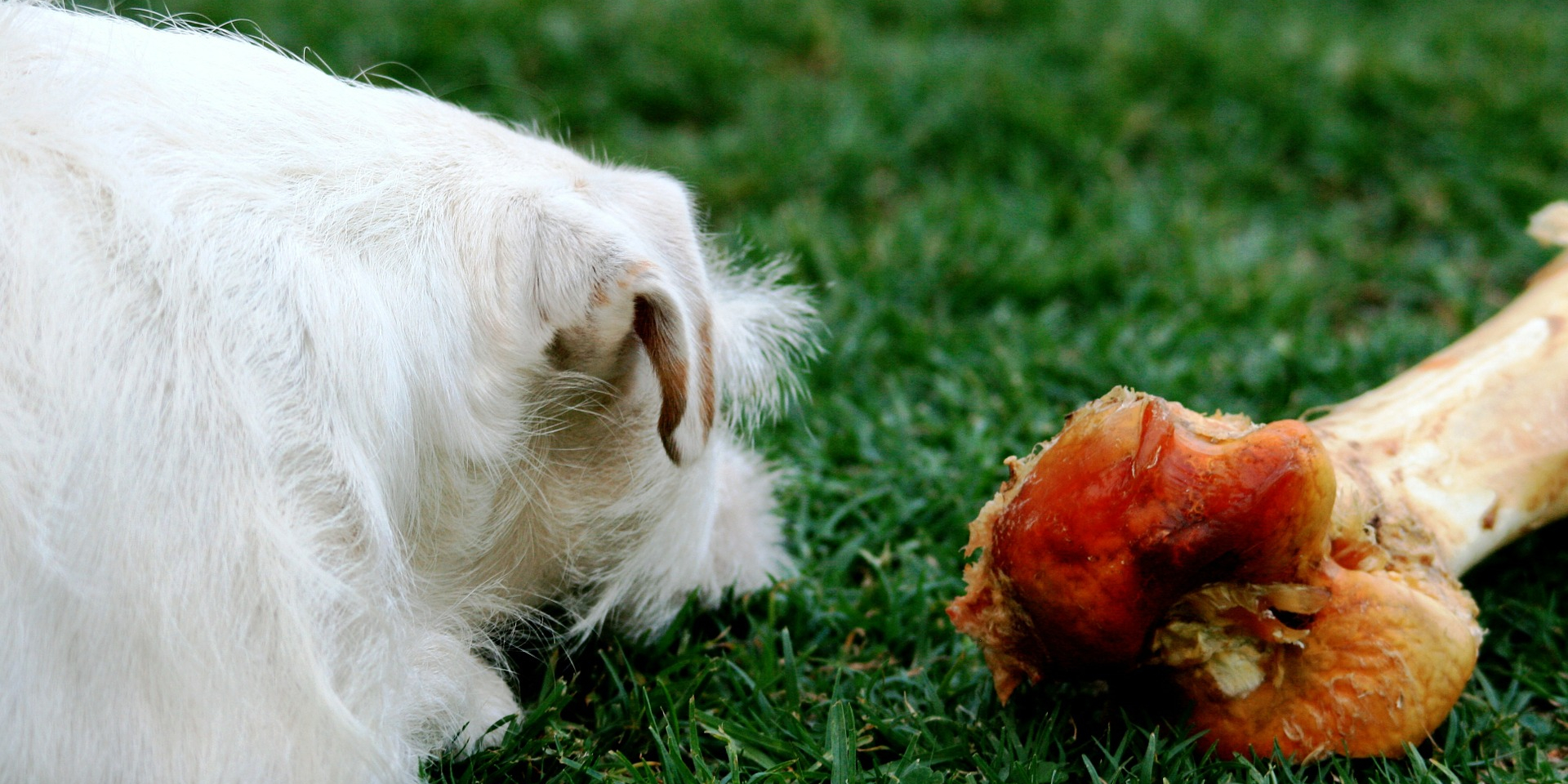 Chewing bones helps alleviate that problem (although the occasional brushing is still recommended by vets). When dogs chew bones they scrape their teeth on them, remove a significant part of the teeth’ plaque, and reduce tartar build-up. In essence, even though chewing on an hours-old bone can seem disgusting, it’s actually healthy and even reduces your dog’s bad breath.

Keep in mind that chewing bones comes with some drawbacks too. For one, many breeds simply don’t have powerful-enough jaws for it while still having the desire for gnawing on bones. Broken teeth are not uncommon in such cases.

Another risk is bone splinters stuck in your dog’s throat. That’s why it’s important to never give your dog cooked bones – they are very easy to splinter! Giving your dog fish or chicken bones is a big No-No for the same reason.

Should you give your dog bones?

Overall, the consensus among most veterinarians is that you should focus on other chewable products as a replacement for bones. Cooked bones are definitely not recommended and while raw bones are safer, even they are just an unnecessary risk. Dogs can get all the joy, dental health, and nutrition out of other chewing products that don’t have the drawbacks of bones.

How Many Bones Does a Dog Have?

Sharing a Bed with Your Dog: Good or Bad?

Foods You Should Never Give Your Pet

How Many Bones Does a Dog Have?

Must Have Dog Toys

We can attest that PupsBest puts all product to the test to find the absolute best before you invest.